Online direct lending and the technology to support it (like Madiston's own global software platform) was explored at LendIt Europe 2017 in London, alongside Open Banking and the imminent seismic changes that could follow new regulation, PSD2 and GDPR. So what were the visions for the future?

Imran Gulamhuseinwala OBE, Trustee of the Open Banking Implementation Entity and Global Head of FinTech, EY talked us through why Open Banking came about and what it could mean for banks, FinTech companies, small businesses and consumers.

Essentially, the major shift in thinking is that individuals own their financial data, not banks, so Open Banking means that registered, trusted companies can, with consent from the individuals, access their transaction data or initiate payments. This improves access for SMEs and individuals to financial services at the best prices and creates opportunity for FinTechs. It was also considered an opportunity for banks with the right, positive approach.

Marketplace Banking was compared to Open Banking by Richard Peers of Microsoft in his first vision of ubiquitous financial services of the future. This is where the banks, via well-defined APIs, offer the services of trusted partners alongside their own. The banks stay in control and offer additional services to their customers but not the unlimited choice that people could potentially have with Open Banking.

Richard's second vision was centrality, where commoditisation becomes a virtue, using technology to drive down costs and providing "banking as a service" (like Clear Bank) to FinTechs and other banks. His third vision of the future was nodality, where customers perform banking functions themselves and institutions provide the infrastructure as trusted nodes. He cited Skype or Alexa as non-financial tools used to execute financial services.

Renaud Laplanche, now of Upgrade, talked about Online Lending 2.0 where new technology delivers lower operating costs, faster development cycles and better underwriting. Borrowers benefit from greater affordability and convenience, and lenders from greater predictability and liquidity. He described a landscape of low debt ratios and economic stability which were clearly emerging from US statistics (perhaps not so in the UK) then made his own predictions for the next 15 months:

Interestingly, Madiston's presentation (picture above) was called "Road to Profitability" because, like Renaud, we believe that technology will save platforms money by driving down operating and software development costs.

There were many threads from LendIt Europe 2017 that touched on the possibilities of Artificial Intelligence (AI) and Blockchain technology. Anthony Jenkins of 10x Future Technologies and Eileen Burbidge of Passion Capital bust some of the myths of AI:

Blockchain technology is also having an impact, discussed in numerous panels and presentations. Unheard of a decade ago, it is growing rapidly particularly in the last 6-12 months. There have been incredible valuations for Initial Coin Offering (ICO) and a great deal of interest from Hedge Funds and institutions, even at pre-sale or earlier stage.

A de-centralised, free market world using the advantages of Smart Contracts blockchain technology could be revolutionary and the idea is no longer unimaginable. Regulators are still busy learning, looking to continue their mission of providing a prudent regulatory framework where innovation (and competition to banks) is encouraged and participants are protected.

So, are Artificial Intelligence and Blockchain technology over-hyped? It was noted at LendIt Europe 2017 that things that are over-hyped in the short term are often under-estimated in the long term.

This is just a flavour of some of the conversations at LendIt Europe 2017 and thank you to the organisers for another well-organised conference. Videos of presentations, panel discussions and corporate demos (including our own) are available on http://www.lendit.com/europe/2017/videos. 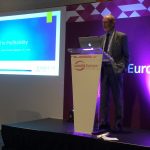 By accepting you will be accessing a service provided by a third-party external to https://madiston.com/